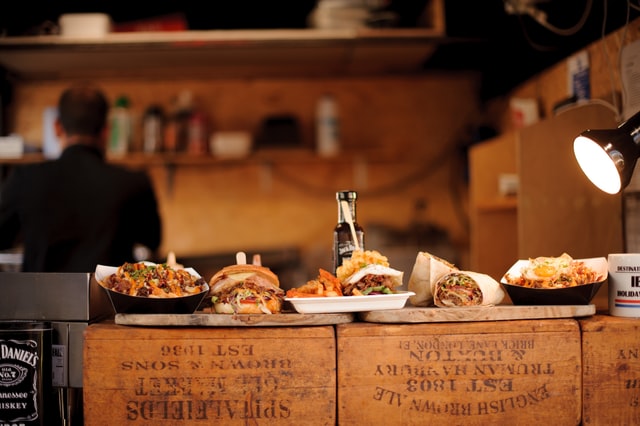 Next time you are looking for accommodation in Newport make sure you explore some of these places to eat. While it may not have the centuries-old food traditions of Paris or Rome, Newport does have a bustling population of people who love to eat well. All the major chains are present but more importantly, there is a growing group of independently run eateries that are quickly turning Newport into a destination that is more than worth the short trip to Wales. Here are some of the shining stars you will want to try on your next visit.

Considered by many foodies to be a must-visit in the Newport area, Junction 28 is housed in a converted train depot complete with dining cars. Large, airy and very comfortable, in a traditional sense, it offers a frequently updated menu with the only constants being delicious food and superlative service. Of special note are the pan-seared scallops served with sautéed wild mushrooms and smoked salmon with capers. Both are worth a special trip when available.

Located along the river, Monusk Tapas pays homage to the sailing ships that once ploughed the seas off the Iberian Peninsula and called Newport home. Their menu features a wide variety of tapas, pintxos and brunch dishes that run the range from local favourites like lamb chops to offerings with more of a Spanish and Portuguese flavour. What Monusk Tapas is best known for is its extensive wine and ale lists which includes in house brews.

At the top of Stow Hill, across from the Newport Cathedral of St. Woolos, Vittorio’s is a favourite among Newport locals. Though the restaurant itself has a thoroughly modern feel, the food is steeped in tradition. Operated by the same family for over thirty years it serves classic Italian fare mixed with the latest creations from their head chef. Surprisingly economical considering the quality and quantity of the portions they place before you.

Founded in 2009 on Newport’s rather bohemian Clytha Park Road, Meat was originally dedicated to serving the most delicious and original burgers to be found anywhere and that is exactly what they did. Building on that original success Meat now offers a wide variety of tasty and creative specials including offerings specifically intended to be veggie and vegan friendly. If you enjoy classics recreated into modern works of art then definitely visit Meat while in Newport.

Located at The Coldra Court Hotel a short drive from the Celtic Manor Resort, The Rib Smokehouse & Grill offers a blending of traditional English dishes and Creole favourites from Louisiana in the Sothern United States the majority of which share one secret ingredient. They are cooked in hickory burning wood-fired smoking ovens. While they do offer vegan dishes that are quite tasty the star of the menu is their succulent slow-smoked ribs prepared with their signature rub.

A multi-award-winning restaurant in Rogerstone-Newport, Mamma Linas does one thing and does it in exemplary fashion, it serves classic Italian cuisine that will make you think you are in Milan, Bologna or perhaps Naples. Family owned and operated its menu is comprised of recipes passed down for generations. From pasta to pizza, from Antipasto to Zuppa del Giorno there isn’t a dish served at Mamma Linas that wouldn’t make a Micheline Star chef proud.

The Pod bills itself as the home of “Street Food at Its Best” and they may just be telling the truth. The Pod offers one the widest assortments of craft beers and cocktails in Newport and their innovative takes on such items as chips, burgers, chicken wings, burritos and other street foods makes the perfect accompaniments to enjoy alongside them. Of special note by Newport foodies are The Pods ‘Waffle Me Up’ wings and ‘Mac Daddy’ steak sandwich.

For a touch of the Middle East in Newport, you can visit Falafilo Island on the city’s High Street. Featuring a wide variety of Syrian, Kurdish and Lebanese dishes as well as homemade desserts, shisha and Turkish coffee all that is missing is sand and camels to make the experience complete. As you would expect meals here are a little pricier than some places but well worth every penny.

The home of art cuisine in Newport can be found on Bridge Street in the guise of Gem42. Dedicated to creating an entirely new dining experience, Gem42 serves marvellous Italian cuisine with a twist that goes way beyond just flavour or the addition of new and exciting ingredients. Sounds and even smells are utilized during the meal to satisfy all five senses.